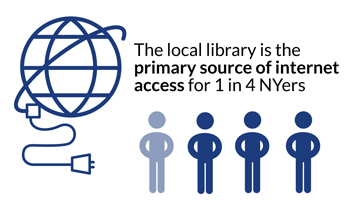 30% OF NEW YORKERS RELY ON LOCAL PUBLIC LIBRARY AS PRIMARY SOURCE OF INTERNET ACCESS; 20% OF WOMEN AND LATINO HOUSEHOLDS, 30% OF HOUSEHOLDS EARNING LESS THAN $50,000 ANNUALLY

ALBANY, NY – A Siena College Research Institute poll conducted between January 30th – February 12th of this year confirms that public libraries are leading the charge in bridging the equity gap, as New Yorkers increasingly rely on the education and technology services provided by libraries.

New York State Education Law requires a minimum level of state funding necessary to ensure every New Yorker, in every community, has access to quality library services. The minimum funding for FY2018-19 is $102.6 million, though NYS has failed to meet this minimum funding threshold each year since 2007. Chronic underfunding of library services continues to ignore the needs of New Yorkers – particularly those needs of economically vulnerable citizens and historically disadvantaged communities.

As New Yorkers increasingly identify their local public libraries as crucial providers of childhood literacy programs and career enhancement services, for the third consecutive year polling data also found libraries serve as indispensable points of internet access: for 30% of respondents, or nearly five million New Yorkers, including 20% of women, 20% of Latinos, 30% of households making less than $50,000 annually, their local public library serves as their primary point of internet access.

The Siena poll findings include:

These results make clear that Governor Cuomo and state policymakers are out of touch with New Yorkers when it comes to valuing library services, and confirms prior polling that showed 90% support increased funding, and 92% consider their public library as a core component of their local education infrastructure. State Library Aid should be fully-funded under the law, but funding must at least increase in proportion to any increase in overall education funding.

About NYLA:
The New York Library Association (NYLA) educates and advocates on behalf of New York’s library community. NYLA is the oldest state library association in the country and represents school, college, special and public libraries, library staff, trustees, and students from around the state.

NYLA is the only statewide organization dedicated to advocating on behalf of all libraries and library staff in Albany and serves as the spokesperson on library matters to the media and public policymakers.

To view all the findings from the Siena Research Institute poll, click here.