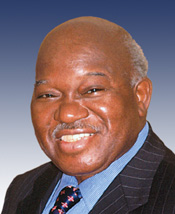 With the death of Major Owen on October 21, the New York Library Association lost a friend and advocate. The 12 term former congressman from Brooklyn was 77 and was often referred to as the “Librarian in Congress” because he once was a librarian at the Brooklyn Public Library.

Consider to be one of the most liberal members of congress he was responsible for shaping legislation that put more federal money into reducing high school dropout rates, hiring more teachers and improving library services.  Before entering congress in 1983, suceeding Congresswoman Shirley Chisholm, he served as executive director of the Brownsville Community Council, an antipoverty group; New York City Commissioner Community Development Agency under Mayor John V. Lindsay and State Senator from 1975 until 1982.

Owens together with Miriam Braverman, Joan Marshall, Mitch Freedman, Pat Schuman and Andrew Armitage was also instrumental in forming NYLA’s Social Responsibility Roundtable in 1969.  The group purpose mission was to create a central position for libraries and librarians in the battles for civil rights, social justice, peace, and ever-improved public access to education and information.

Recalling his friendship with Owens Barry said, “throughout Major’s librarian career, we walked picket lines together, marched in protests, and organized fellow librarians to join workers, minorities, the poor, and people in general in their struggles for information, education, and a fair shake.”

Major Robert Odell Owens was born in Collierville, Tenn., on June 28, 1936, to Ezekiel and Edna Owens. His father worked in a furniture factory. In 1956 he graduated from Morehouse. Before moving to Brooklyn he received a master’s degree in library science in 1957 from Atlanta University (which later became Clark Atlanta).