NYLA members are eligible for discounted admission to Book Expo America. We will also be providing a free bus to and from the show on Friday, May, 29.

As you browse the articles in the e-Bulletin be sure to click "Current Issue" to return to this main page.  The "Home" link above will take you to the NYLA homepage.

A Message from the President...

April is finally here and it is my sincere hope that spring arrives with it. et time is upon us. I want to thank everyone for the fantastic turnout at NYLA Advocacy Day, and the subsequent record response to the electronic requests for people to take action on the state budget.  Expanding our advocacy base beyond library employees and trustees is a major goal for our organization.  We know that our message has an impact at the state level.  This year’s response was the biggest ever, and I would love to see an even larger response next year.

Did You Know that Film Screenplays are Housed at Binghamton University Libraries?

Are you interested in B-movies and Hollywood classics? Have you ever wondered how the first draft screenplay of a film differs from the final version? Are you curious to see handwritten notes from well-known actors, photos from costume designers, and letters from film censors? If so, visit the Binghamton University Libraries’ Special Collections, which is now home to a large collection of original film screenplays.

Originally a courthouse, the Jefferson Market Library has served the Greenwich Village community for over forty years. The building, a New York City landmark, was designed by architects Frederick Clark Withers and Calvert Vaux (who also assisted in the design of Central Park) in a Victorian Gothic style. It was erected—along with an adjacent prison and market—between 1875 and 1877 and cost the city almost $360,000. 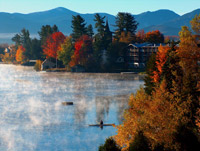 Save the Date for the 2015 NYLA Annual Conference & Trade Show in Lake Placid, NY

From Conferences, to Webinars, visit nyla.org for details.