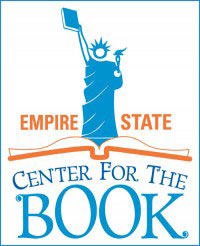 Each year the Library of Congress’ Center for the Book asks each state to submit a title to be included in the "Great Reads About Great Places" reading list. The list is then included on the Discover Great Places Through Reading Map that is distributed in the Pavilion of the States at the National Book Festival.

The Empire State Center for the Book, our state affiliate for the national Center for the Book, which is housed at the New York Library Association is asking for your input in selecting the 2012 title. We are looking for a title of either fiction or non-fiction, that is about New York or by a New York author. Of course, we want it to be a good read for children or teens.

In recent years the books selected to represent New York have been:

2009 – River of Dreams: The Story of the Hudson River (Putnam, 2009) by Enrique Lamadrid and Hudson Talbot

Please send your suggested title with author and publication information and a brief reason for its selection to authors@nyla.org by May 15, 2012. A final selection will be made by the Empire State Center for the Book.