The New York State Capitol and the Great Fire of 1911

In each edition of the NYLA eBulletin we will be reviewing books with deal with New York. If you are interested in being a reviewer please contact editor@nyla.org. 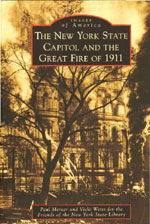 Founded in 1818, the New York State Library, housed on the 2nd floor of the New York State Capitol, was almost completely destroyed by fire on March 29, 1911. While the cause of the fire was later officially noted as “electrical,” suspicions pointed to legislators smoking and drinking at a party in the building. In what was an ironic turn, the fire broke out only four months before the collection was to be relocated to the newly built State Education Building on Washington Avenue. Renowned as a premier research library around the world, and including law and medical libraries, a large reference collection, special collections, and founding state documents, the devastation to the library’s collections was unthinkable, and letters and telegrams of sympathy poured into Albany.

The New York State Capitol and the Great Fire of 1911 is a treasure trove of historical and archival information on the fire, its immediate aftermath, and years of subsequent collection development by dedicated professionals. Written by Paul Mercer and Vicki Weiss, New York State Library subject specialists, the authors delve into the library’s special collection of documents, clippings, and photographs of the fire to bring this book to life. The work traces librarians’ efforts to rebuild, so that in spite of the tragic loss, the New York State Library emerged from the ashes to become, once more, one of the largest research libraries in the country. Part of The Images of America series, this work presents a very distinctive event in Albany’s past that has shaped its character to this day.

At 128 pages, with at least two photographs on each page, the reader is drawn back in time through the history of Albany – various photographs of people, buildings and construction from the 1800s are well-represented -- and the history of the library profession itself. While library issues regarding budgets, staffing, and space would be familiar to the profession in 1911, other issues and practices have changed. That is part of the enjoyment of reading this handy work – learning about professional differences in over a hundred years’ time.

While this book would be inspirational to librarians, library students, and others in the field (since it documents the hard work and dedication of those rebuilding from the ground up), it would also be of interest to general readers and those with an interest in history.

Tracy Salvage is the Reference & Circulation Librarian at Columbia-Greene Community College Library. She can be reached at tracysalvage@hotmail.com.