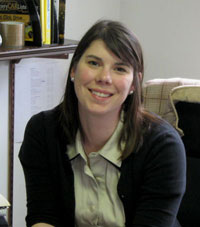 Kristin White became Library Director for the three-branch Western Sullivan Public Library in April 2012. The branches are located in Jeffersonville, Narrowsburg, and Callicoon, NY. Prior to that, she served as Library Director in a similar three-branch rural district in her home state of Tennessee, as well as in the nearby rural library in Roscoe, NY.

Where did you grow up?

Did you spend all your childhood and teen years there?

I grew up in Knoxville and then spent my high school years in Chattanooga. I did my undergrad work at East Tennessee State University, in Johnson City, Tennessee.

Did you grow up in an urban part of Knoxville, or was your area suburban or rural?

Rural. My dad worked for the Tennessee Valley Authority (TVA). He’s retired from there now.

So is your family all still back in Knoxville?

Yes, they’re all still there.

What was your major in college?

I always wanted to be a nurse when I was younger, so I was in nursing school at ETSU and eventually decided it was just not the right direction for me anymore. And then I didn’t know what I wanted to do. I met my husband and we moved to Delaware County here in New York. I started going to a book group at the local library and decided that I really liked it, so I started volunteering. That led to a paid job as a library clerk, and I thought it was fabulous. So I decided to pursue my master’s degree.

Did you go for an MLS?

I received an MLIS, a Master’s in Library and Information Science from San Jose State University, in California, through an online degree program.

But you weren’t out there.  You could do the whole master's program online?

Yes. It’s amazing that you can do the whole program online. There aren’t any library schools here in our area. Albany has a program, of course, but it’s 130 miles away, and they don’t offer it online. Syracuse offers it online, but there’s a financial issue there with a private university.

San Jose State offers a really great program, and it was very affordable. I had some really great classmates and teachers, and my advisor was wonderful.

Did you ever actually have to appear there?

No, I never had to go out there.

You know, we didn’t, and I kind of wished that we had, because I think it would have been really fun and useful. I love Skype now, and that’s how I keep up with my family, for the most part. We did some voice chats in school with classmates when we were in group sessions. And you had to do presentations that way, as well. We had to do book talks to the class via voice chat.

So tell me more about the experience in the San Jose State program. How many people were in the program?

I don’t know exactly. The class size was small. I don’t remember feeling overwhelmed by the number of students in my classes. And you tended to overlap. You wouldn’t be with exactly the same students every single semester, but, for the most part, you got to know many of your classmates because you ended up having many of the same classes with them—especially if they were doing the same concentration, like public libraries for me.

When did you go through this program?

Have you talked with other people in this region who have gone through online programs?

No, I haven’t, actually. That’s probably not a bad idea.

So you got a job as a Library Director while you were just starting the program?

Yes. I started in Roscoe at the end of 2007, so I had already been in the program for two semesters. Then I left Roscoe in June 2008 to go do exactly what I’m doing here but do it in Tennessee. I was running three libraries there.

But you came back, which is good! By the way, what does your husband do?

Whoa! Great! I mean, I know this area is one of the great centers for fly fishing in the United States!

That’s right! He works six months out of the year. He starts in April and works through October.

You represent a younger generation of library leaders, and you represent a rural demographic in more ways than one—not only in the population you serve but in the way you’ve lived your entire life—all rural—and the way you enjoy your lifestyle today.

One of the advantages of this area is that it’s small. It’s a close-knit community, and you can find all kinds of things to do here. For example, I really like local sustainability—local farms, farmer markets, shops, locally produced goods—and that’s all to be found here.

What were your experiences with libraries as a child? Were you a library lover? Were you a big reader?

I was a book lover and a library lover. I’ve always been a reader.

What kind of books did you like when you were really young? Do you remember?

I liked series books, like the Trixie Belden mysteries—I loved those. The Laura Ingalls Wilder books—I loved those, which is kind of interesting, because I love homesteading, farming and that type of thing.

Did you carry on with an interest in reading once you got into your teen years?

I remember some of the things I read in school, like To Kill a Mockingbird and The Once and Future King. I had a fabulous English teacher in high school, in freshman or sophomore year.

So here you are, a member of NYLA, working here along the beautiful Delaware River, in the Delaware River Valley, and some of your fellow members in NYLA go to work each morning by subway on their way to the majestic main branch of the New York Public Library in Manhattan, with those two big stone lions out front—so, tell me, tell them: what is it like getting up and heading out to work in the morning around here?

I imagine it’s quite a bit different than taking the subway to work, for sure! The sunrise is beautiful. You have the fog over the river in the morning. My commute is an easy, eye-pleasing one, and it’s all on country roads.

Sounds exactly like the New York City subway! So you were working in Roscoe as the Library Director. What do you remember about that?

In 2006 the Roscoe Library had been flooded. There was a big flood around the Delaware and Beaverkill rivers—a really devastating flood. The Roscoe Library had about five feet of water in the building. So they had moved around as they renovated the building, and they had just moved back in when I got there. I redid the children’s room. It was just a small area, and I rearranged it, hung interesting things from the ceiling—just made it kind of friendly to the kids.

We got a movie license and we started showing movies. We did a Harry Potter program when one of the movies was coming out. But I was only there for eight months. The majority of that was cleaning out the back room and kind of polishing up the library a little bit. It was functional, but we moved some things around and—lots of donations came in, so a lot of the job was also going through that and trying to add those back into the collection.

And then you went back to Tennessee. Where did you work there?

I worked for the Hawkins County Library System, which was a three-branch county library system. We were chartered to serve all of Hawkins County, which has about 60,000 people. I worked at the main branch. We had the largest branch in Rogersville, where I was, and then we had a small branch in Surgoinsville, and then we had a branch inChurch Hill, which was about 5 minutes from Kingsport. I was there for almost two years, from July 2008 until February 2010.

Did you come back here without a job?

No, I had gotten a job before we came back. I worked for DCMO BOCES (Delaware-Chenango-Madison-Otsego), in Norwich, New York, for the past two years, till I came here a month ago. Whenever we thought about where we’d want to go, what we’d want to do, weighing our options, and so on, we’d think of here. And then the job at BOCES came up, so we moved back.

I love it here. The interesting thing is that my husband finds what he wants and I find what I want. He loves the river. I like the local communities and the farm markets and the sustainable agriculture and the friendliness and the openness, which I’ve found amazing in this area. I’m feeling really good about this!

To read the remainder of the interview, featuring a deeper look at the Western Sullivan Public Library, click here.

Joel Friedman is a writer, editor, and web content consultant (http://jfcontent.com). He served for a brief time in 2010 as Deputy Director at NYLA and is proud to be a member of both NYLA and his local Friends of the Library.