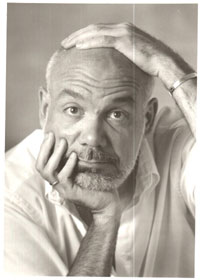 Bruce Coville is the 2012 recipient of the Empire State Award for Excellence in Literature for Young People. The award is presented by the Youth Services Section of the New York Library Association.

Bruce was born in Syracuse, New York. As a young reader he loved Mary Poppins and Dr. Dolittle. He also read lots of Hardy Boys, Nancy Drew and zillions of comic books. His only regret is the time he spent watching television, when he could have been reading.

His first book, The Foolish Giant, was published in 1978. It was illustrated by his wife Katherine. Before being published, Bruce worked as a toymaker, gravedigger, cookware salesman and an elementary school teacher. He leftteaching in 1981 to devote himself to full-time writing.

Bruce’s ninety-nine books have been published in over a dozen countries and have sold more than sixteen million copies. His newest book, Always October, will be published in August 2012 by HarperCollins. Bruce founded Full Cast Audio, an audiobook company dedicated to creating unabridged, full cast recordings of the best in children’s and young adult literature in 2001. He lives with his wife in Syracuse, New York.

Bruce will accept his award and be the featured speaker at the Empire State Luncheon during the NYLA Conference on Friday, November 9, 2012.

Nominations for the 2014 Award can be made here.

Click here to read one NYLA member's experience with Coville as her teacher.