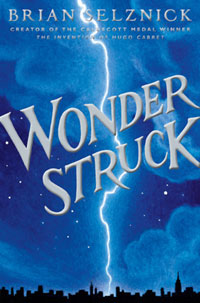 In Wonderstruck, Selznick takes his reader through New York City in thrilling, dangerous and unexpected adventures.   “In The Invention of Hugo Cabret, (Scholastic, 2007) Selznick uses Paris as a backdrop and in Wonderstruck New York City is utilized in a similar manner,’” said Rocco Staino, chair of the Empire State Center for the Book.  “He brings both the 1927 & 1977 New York City to life in this book.”

In addition, Anisha Kasi of New City, the level one Letters About Literature state winner used both Selznick and Wonderstruck as the subjects for her prize-winning letter.

“Thank you for helping me realize that a book can be more than a piece of fiction,” wrote 10-year-old Kasi in her entry.  “Wonderstruck helped me experience the past through the present and cherish the bonds that connect different generations in a very personal way.”

The Letters About Literature is a national reading promotion program of the Center for the Book in the Library of Congress. Each state chooses winners on three levels.  The New York State winners were recognized at the New York State Writes Fall of Fame Induction on June 5th where E. L. Doctorow, Pete Hamill, Toni Morrison and Joyce Carol Oates were amongst those inducted.

At the June 5th event Anisha Kasi was presented with an autographed copy of Wonderstruck.  In addition, Selznick sent Kasi a letter that is reproduced below:

The National Book Festival will be held on the National Mall on September 22 & 23, 2012. It will feature award-winning authors, poets and illustrators in several pavilions dedicated to categories of literature. Festival-goers can meet and hear firsthand from their favorite authors, get books signed, have photos taken with mascots and storybook characters and participate in a variety of learning activities. The Pavilion of the States will represent reading- and library-promotion programs and literary events in all 50 states, the District of Columbia and the U.S. trusts and territories.

For further information about the Empire State Center of the Book visit http://empirestatebook.org/