Members on the Move

The Berne Public Library and the Rensselaerville Library are two of 50 libraries nationwide who received the Pushing the Limits PLACE grant sponsored by NOAA and the National Science Foundation.  Public Libraries Advancing Community Engagement is focusing on the resilience of communities in the face of severe weather events and climate change.  A NOAA scientist is paired with a librarian for three sessions where science cafe meets book club.

For more information including photos, quotes, etc. see our website.

After watching the movie, Hidden Figures, Rita Foran and 54 students at Richard T. Stank Middle School used Google's "Made With Code" program. Adopted by the National Federation of Women Legislators, the program features subjects many girls are interested in - fashion, music, design, emojis, etc. A representative from Assemblywoman Donna Lupardo's office addressed the girls on the importance of women in STEM careers.

Exciting changes for the Friends & Foundation of the Rochester Public Library (FFRPL)!
Rebecca Fuss, for four years our outstanding Director of Programming & Outreach (and current President-Elect of NYLA Friends of Libraries Section), is now FFRPL's Director of Advancement.
Susan Chekow Lusignan has taken Rebecca's former position, which has evolved into FFRPL Director of Marketing & Program Development. Holly Hammond has just come on board as our new full-time Database Administrator, under the supervision of long-standing FFRPL Financial Manager Reuben Burch.
Finally, FFRPL Executive Director Ned Davis recently began a 3-year term as 'Friend At Large' on the board of ALA's United For Libraries (the association of library trustees, advocates, friends and foundations).

Young-In Kim is the new Access Services & Assessment Librarian at The College of Saint Rose. Young-In recently completed her MSLIS with the iSchool at Syracuse University. She also brings with her over 15 years of experience working as a paraprofessional in academic libraries.

The Lewiston Public Library is proud to announce that we were selected to receive one of three Bookapalooza collections from the national Library Services for Children(ALSC) Association. 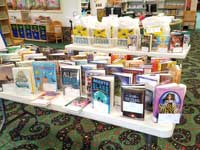 “The Bookapalooza program offers select libraries a collection of materials that will help transform their collection and provide the opportunity for these materials to be used in their community in creative and innovative ways.” Through the month of June the library received 43 boxes of books and other materials from the ALSC as part of this program. These items were used to enhance our existing collection. The library created Subject in a Bag kits, as well as Home Educator kits. All of which will be available for checkout by patrons.

The Manlius Library is having an event to celebrate their Audubon Gallery and the generosity of Dr. Harold and Barbara Jones. From the press release, “Dr. Harold and Barbara Jones of Manlius have donated a remarkable gift to their local public library: a carefully curated and valuable gallery of Audubon prints and related works.  The gallery’s final iteration will be celebrated on Saturday, October 14 at the library with a full day schedule of bird-themed events for all ages.”

Chrissie Morrison has recently been hired as the Youth Programmer at the Mechanicville District Public Library in Mechanicville, NY.  Chrissie is excited to both work in her local community and to return to the world of tween and teen programming!

Onondaga Free Library is thrilled to welcome Maggie Gall as their new Youth Services Librarian.  Maggie comes to us from Columbus Metropolitan Library in Columbus, OH where she worked as a Youth Services Specialist and Information Specialist.  She graduated from Kent State University with a Masters in Library and Information Science with a focus on Youth Services.  Maggie served on the Ohio Library Council as a student representative, was an Ambassador for International Federation of Library Associations in 2016 and studied international children's literature and librarianship in Denmark.

The Pioneer Library System will hold its Annual Meeting & Luncheon on Wednesday, October 11th. At the luncheon, we will be presenting a "Pioneer Award" to 5 very deserving recipients who work throughout our member libraries, on their Board of Directors or within our community.

River Campus Libraries, University of Rochester would like to announce the recent appointment of Anna Siebach-Larsen as the new Director of the Rossell Hope Robbins Library and Koller-Collins Center for English Studies.

Saratoga Springs Public Library welcomes Teen Services Librarian, Colleen Whittall, and Literacy and Assessment Librarian, Mary Ann Rockwell, who both joined our ranks in late August. Colleen was previously a Public Services Librarian at the Maitland, FL, Public Library; and Mary Ann previously worked as a Circuit Librarian for Samaritan Medical Center's Hunter-Rice Health Sciences Library, in Watertown. They are also thrilled to welcome Jennifer Ferriss and Renee Bennett-Kapusniak, who recently joined us as Head of Circulation and Technical Services, and Children's Services Librarian, respectively. Jennifer was previously the Assistant Director at Southern Adirondack Library System, and Renee recently completed her PhD in Library and Information Science at the University of Wisconsin - Milwaukee.

Jack Scott started as the new Technology & Youth Services Consultant at Southern Adirondack Library System. Formerly he was a librarian at the Livonia Public Library in the Pioneer Library System.