Assembly Roundtable On “Use Of 21st Century Technology In Libraries” 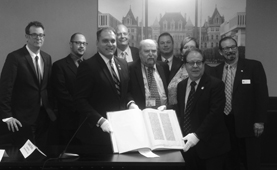 Acknowledging this reality, on Thursday, March 3, 2016 the Assembly Committee on Libraries and Education Technology, Chaired by Assemblyman Thomas J. Abinanti (D – Tarrytown), hosted a roundtable to explore the “Use of 21st Century Technology in Libraries.” Particular focus was given to whether current state funding for public, college, and special libraries adequately supports the deployment of current technological assets, and long-term development of technological infrastructure. Included in this discussion was: broadband access; digital archiving; education technology in libraries; and avenues for shared access to digital materials among libraries of all types.
Though the roundtable was informal – Assemblyman Abinanti referred to it as a “working group” – it served as an opportunity to educate state legislators about what is happening out in the field, and the effect that years of reduced funding and policymaker neglect have rendered on patron services.

The event was recorded, and can be viewed here. StateWatch New York’s coverage of the event can be found here.

The Assembly Committee on Libraries and Education Technology invited the following library leaders to participate in the roundtable:

Part 1: The Use of 21st Century Technology in Libraries from NYSED on Vimeo.