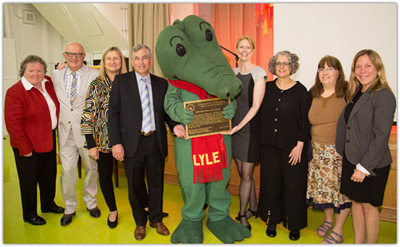 In its continued partnership with United for Libraries, the Empire State Center for the Book dedicated another Literary Landmark. The most recent designation was the Yorkville Community School in New York City.  What makes this school special is that it is located on East 88th Street.  The street was made famous in 1962 by Bernard Waber in his book, The House on East 88th Street.  The book introduced the now famous Lyle, the Crocodile, to children and to the world of KidLit. It is a story about the Primm family who moved into an old Victorian brownstone, only to find a performing crocodile named Lyle living in the bathtub.

Members of the Waber family joined officials from United for Libraries, Houghton Mifflin Harcourt and the Children’s Book Council to celebrate the dedication, which occurred simultaneously during Children’s Book Week (May 12-18).  First and second graders from the school gathered in the school’s auditorium to hear Waber’s grandchildren: Anna Cash; Mason Cash; and Reuben Gordon, read The House on East 88th Street.  The schools chorus entertained attendees with renditions of “Look on the Bright Side” from the Lyle the Crocodile musical and Eastside, Westside.

However, the highlight of the event proved to be a visit from Lyle, the Crocodile himself.  Students mobbed the Crocodile.

Waber’s daughter Paulis told Publishers Weekly of her family’s deep gratitude for the tribute, thankful that “Lyle the Crocodile will always truly live on East 88th.” She offered a brief remembrance of her father, and imagined what his reaction to this honor might have been.

Wording on the plaque:

This is the third literary landmark in which the Center for the Book has been involved.  The others are the Cathedral Church of Saint John the Divine in honor of Madeleine L’Engle and the Windmill on the Southampton Campus of SUNY Story Brook.  There are currently a total of 12 landmarks in New York State.

The center has just nominated the Walt Whitman Birthplace as its next Literary Landmark with the Suffolk County Library Association, Suffolk School Library Media Association and the Lambda Literary Foundation have signed on as co-sponsors.  A dedication is planned for early September.